Today's post is part of a blog tour where writers answer four questions about their writing process. My fellow Regency author Beth Elliot posted her entry last week and sent me an invite (thank you Beth!).   So now it's my turn...

'Rakehell' started out as a novella but on the way it turned into a short novel so now I'm not sure what to label it!   I was hoping to publish before Christmas (that would make sense, right?!) but 2013 has been a difficult and stressful year and I haven't been able to write often.  Consequently, I'm waaaaay behind.  I'm keeping everything crossed for better times in 2014.

The good news for those interested is that you won't have to wait until next Christmas to read Rakehell;  I'm sending it out into the world early next year.  I think the hero, Hugo, is worth waiting for and I’ve had heaps of fun throwing together this oh-so-masculine but conflicted man with my practical heroine, who disrupts his carefully planned Christmas  ;0) 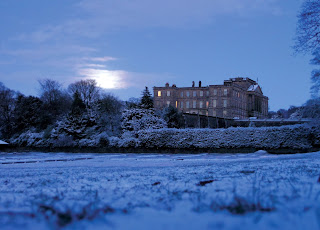 The idea for Rakehell was sparked when a dear friend sent me details of a real house called Rake Manor which is tucked away in the English countryside.

We laughed about it at the time and said it needed a story so it's going to get one.  Gilly, Christmas at Rakehell Manor is for you :)

I try to write stories that are captivating, passionate, have a dash of humour and are worth re-reading.   I liken it to baking a cake - strive for an ideal blend of ingredients, cook carefully with attention to detail until romance peaks and a memorable result is achieved :D

When they buy a book, readers are investing not only their money but their precious time so I want them to feel satisfied, to experience that warm, fuzzy, emotional, happy-ever-after glow. The quality of what I produce matters a lot to me.

It's also important to get historical details right, as far as possible.  As a British author I'm writing about my history and heritage.  I feel obliged do it justice.  Of course the language and some other aspects need to be accessible to modern readers - they want romance not a dry history lesson - and all historical writing is interpretation anyway, but deviate too far and it turns into a contemporary romance with fancy dress.  And glaring anachronisms pull readers out of historical romance faster than you can say Jack Robinson ;0) *

(* According to Grose's Dictionary, published in 1785, Jack Robinson was an individual whose social visits were so short that he would be departing almost before his arrival was announced! )

I write for people like me, who just need a little escape from the stresses of daily life.

I'm a romantic at heart and love the magic of romance novels.  Historical romance, particularly that set in Georgian and Regency periods, is the genre I've always enjoyed most. It seems natural to write what I like reading.

Ideas are never a problem - the difficult decision is usually which ones to develop further! I do a rough plan and character outlines before starting a new project.  I might research some details if I know they are going to be needed, but otherwise I look things up as I go along.  Over time I've built up a collection of reference material and background knowledge.  I find it impossible to plot a novel in fine detail before starting to write.  I need to jump into the room where the action is rather than standing outside and pressing my nose against the window pane.

Writing has to fit around everything else but that usually works out OK because I write best in late afternoon and evenings.  If I get chance to sit at my PC before then, I'll avoid the creative stuff and answer emails, update my blog and web site or waste time on Facebook instead ;0)

Then I read through what I have written previously and resist the urge to edit too much.  This is tough because I prefer to edit and add detail as I go, but it's not the best way of getting a book written.  When I start writing I hope to make it to the end of a scene or a suitable break point before finishing. I can touch-type so it's quicker for me to type than write longhand. I've learned not to beat myself up if I don't achieve my daily word count, given everything that's happened this year.

Sometimes I listen to music while I'm writing.  Here's the very varied playlist for Rakehell in no particular order.  Some of these have a connection to the plot and characters but some were simply right for the mood I was in, or trying to convey in a particular scene  :)


Thanks for stopping by and reading, and please feel free to comment!


Next week (on 23rd December) it's the turn of Georgia Hill

Georgia writes contemporary rom-coms for Harper Impulse. She loves dogs, Belgian chocolate and Strictly Come Dancing. She lives in rural Herefordshire, in the UK, with her beloved spaniels and  husband (also beloved).