250 years of The Sandwich

Ok this is another blog post about food but it's a notable anniversary LOL!

This year is the 250th Anniversary of The Sandwich.  It all started in 1762 when, as legend goes, John Montagu, the 4th Earl of Sandwich and an ardent gambler, refused to break from his games to dine formally. Instead he called for his manservant to bring him slabs of beef between hunks of bread so that he might eat it while continuing to play cards.

His gambling friends soon adopted the same habit, and when the Earl ordered his snack, they would shout 'The same as Sandwich!', and thus, the story goes, the sandwich was born.

An alternative but less colourful version is expounded in the Earl of Sandwich's biography, by N.A.M. Rodger. He suggests that Sandwich, a hardworking member of the military who was heavily involved with the political world and the arts, is more likely to have eaten the sandwiches at his desk.

Whatever the truth, the 4th Earl of Sandwich sparked a trend that continues to the present day, generating an industry that employs 300,000 people in the UK with a commercial value of over £6 billion.
Today Britons munch their way through 11.5 billion sandwiches per year (!!), half of which are made at home.
British Sandwich Week starts tomorrow 12th May.  Visit The British Sandwich Assocation (yes, there is one!) at www.sandwich.org for more information and the website for Sandwich, in Kent, where special celebrations to mark the 250th anniversary are taking place this weekend.

Everyone loves a pudding (or if you prefer, dessert).  I know I do *g*  So I was delighted to stumble across a little gem of a programme on Channel 4 called Glamour Puds.

Glamour Puds is presented by one of the world's best patisserie chefs, Eric Lanlard.  Series 2, currently showing again on Channel 4 in the UK is about the legacy of the very first celebrity chef, Marie-Antoine Careme. 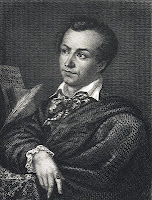 Over 10 episodes Eric and his guests chart Careme's rise from humble beginnings in late 18th century Paris to become 'King of Chefs', his influence on patisserie and his legacy.

And along the way, Eric makes some sumptuous desserts :0)  All the recipes are listed on the Channel 4 website here by searching for Glamour Puds.    Check out this link on YouTube too ;0)

Souffle Pompadour is one of my favourites.  Yum!