But hold on ... what exactly is Oak Apple Day? Well, it commemorates when Charles II rode into London on 29th May 1660 and restored the monarchy to England.

Charles II was said to have hidden in an oak tree 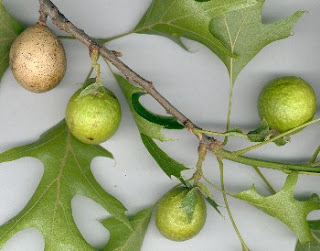 in 1651 after the Battle of Worcester. He escaped from the Roundhead Army by hiding in an oak tree in the grounds of Boscobel House. Oak leaves and oak apples became a symbol of his restoration to the monarchy and Parliament declared 29th May a public holiday.

“Parliament had ordered the 29th of May, the King’s birthday, to be forever kept as a day of thanksgiving for our redemption from tyranny and the King’s return to his Government, he returning to London that day." - Samuel Pepys’s Diary 1st June 1660

2010 therefore marks the 350th anniversary of Oak Apple Day (or Royal Oak Day as it is also known).

The day was originally celebrated with special church services, bonfires, dancing and general merry-making. Houses and churches were decorated with oak boughs, but the dominant custom which came to symbolise the day was for people to wear sprays of oak leaves (preferably with a gall or apple attached).

This was done by almost everyone, high and low born, male and female, adult and child, throughout the eighteenth and nineteenth centuries. A traveller through Hertfordshire recorded in his diary in 1789 that 'every horse, carriage and carter was adorned with oaken boughs and apples, in memory of this once famous day'.

School children were given at least half a day off school and anyone who did not wear the emblem could face some form of punishment, such as pinching (hence the origin of the alternative name Pinch-Bum Day) or whipping with nettles (Nettle Day).

Although the public holiday was abolished in 1859, Oak Apple Day continues to be celebrated in some parts of England.

Castleton in Derbyshire hosts a garland custom every 29th May. It's custom that has been celebrated in Castleton for hundreds of years, originally possibly as a fertility rite, but today it is said to commemorate the restoration of Charles II. Villagers dress in Stuart fashions and chose a King and Queen for the day. They lead a procession through the village and the King wears a 3 feet high garland of flowers made from a wooden frame to which small bunches of wild flowers and leaves are tied.

Northampton still commemorates Charles II and his escape after the battle of Worcester. The town is also grateful to Charles II for giving the citizens one thousand tons of timber from the Royal forests of Whittlewood, after a great fire almost razed the town in 1675. A garland of oak-apples is laid at Charles II's statue on All Saint's Church each year on Oak Apple Day.

In Worcester, the 'Faithful City', Oak Apple Day is commemorated by decorating the entrance gate to Worcester's Guildhall with oak branches and leaves. 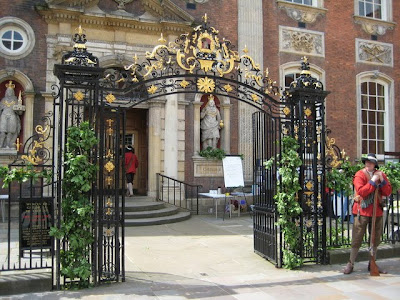 In a celebration with its roots in Oak Apple Day, the Shropshire village of Aston-on-Clun carries out a unique tree-decorating custom on the last Sunday in May (Arbor Day). A pageant and fete are held and the famous black poplar tree that stands in the middle of the village is decorated with gaily coloured flags. The story behind this custom is that when local landowner and squire John Marston married Mary Carter in May 1786, the tree was decorated to welcome the newlyweds to the village. The couple were so pleased with the gesture that they set up a trust to pay for the care of the tree and the flags.

There are a host of other local dialect names for Oak Apple Day, including: Shick-Schack Day, Shig-Shag Day, Yak-Bob Day and Bobby-Ack Day.


Right, I'm off to find my spray of oak leaves and apples before I get whipped with nettles *g*

Ever heard of one of these? There's one at Hanbury Hall in Worcestershire which I visited again recently. 'My' house *g* If only! As I type this, I realise I'm not certain where to put the apostrophe in snobs tunnel (should it be snob's or snobs'? I'm guessing the latter - more than one snob must have lived at Hanbury over the years ;0))

A snobs' tunnel sounds like something the aristocracy would have used, but it was actually the opposite - a specially constructed tunnel which allowed servants to move around without being seen by their masters.

At Hanbury, the snobs' tunnel goes under the Cedar Walk so servants could walk between the main house and areas of the garden (such as the ice-house) unobserved. 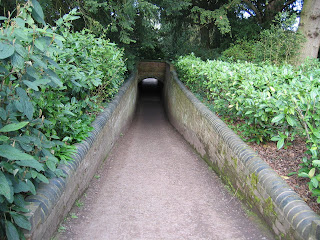 ...and the exit viewed from the rear of the house. You can see the tunnel in the centre of the picture just behind the bush. 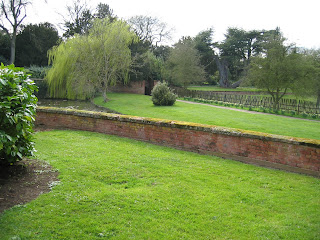 Seems an astonishing amount of effort and expense just to keep servants out of sight!

Hanbury Hall was home to the Vernon family. Edward Vernon purchased Hanbury in 1631, but it was his grandson Thomas Vernon who began serious rebuilding after he inherited in 1679. The architect was possibly a local master stonemason William Rudhall. The rebuilding was completed in 1701 and if you look at the entrance front, you can see Hanbury has many key features of a William & Mary house:

Symmetry
Two stories with dormer windows in the attic
Side Pavilions
A central triangular pediment
A cupola (viewing tower)
Family coat of arms (above entrance door)
Corinthian pilasters either side of the entrance. 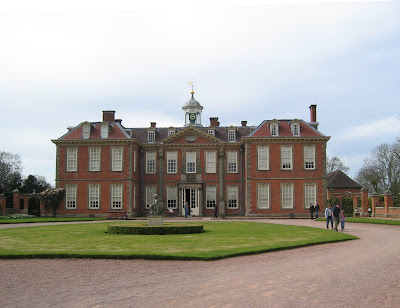 Hanbury Hall contains the Thornhill Murals in the entrance hall and staircase. When Sir George Vernon left Hanbury to the National Trust on his death in 1940, these murals saved the house for the nation - the National Trust recognised their value and took on the house for future generations to enjoy. The murals, depicting scenes from Greek mythology, were painted by Sir James Thornhill, a master painter whose fame was sealed by his work on the dome of St. Paul's Cathedral. 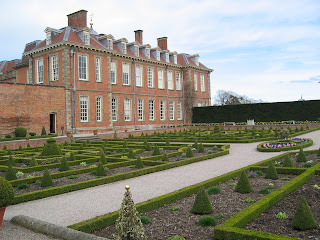 Thomas Vernon wanted a beautiful garden to go with his new house and in 1700 he commissioned George London to design it. London had been apprenticed to John Rose, the Royal gardener at St. James' Park who had in turn been trained at Versailles. It's likely that this connection inspired London to create a Baroque-style garden like that at Hanbury Hall.


The avenues and parterre at Hanbury are perfect examples of this. Much of London's design was swept 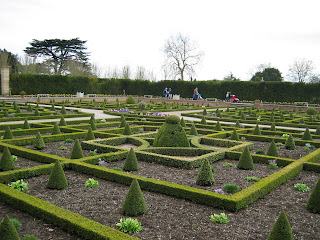 away in the 1770s by Emma Vernon, who favoured the more natural landscapes of Lancelot 'Capability' Brown, the pioneer of the picturesque movement, but in the 1990s, the National Trust began a project to restore the gardens, based on an estate survey of 1730. The restoration is on-going with the focus on the re-planting of park features such as the Semici 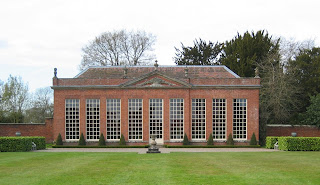 Along with the snobs' tunnel, the ice-house, the mushroom house, the soon-to-be-restored dairy, magnificent 18th century orangery (above) and orchard are all worth well worth visiting.

I also learned details of a fascinating family story from the 18th century. The outline is definitely something I'd consider using in a novel and it just goes to show that fact is always stranger than fiction.

And I can't help wondering, for the purposes of fiction, what intriguing scenes might have taken place in that dimly-lit snobs' tunnel ... ;0)