As a fan of Georgette Heyer since my teens, yours truly was delighted to be asked to take part in a month-long celebration of her work over at Laurel Ann's fantastic blog, Austenprose.com. The event coincides with Heyer's birthday on 16th August and will feature thirty-four book reviews of her romance novels, guest blogs, interviews of Heyer enthusiasts from the blogsphere, academia and publishing and tons of great giveaways.

Special guests will be Heyer expert Vic Sanborn of Jane Austen’s World and Deb Werksman, acquiring editor of Sourcebook Casablanca and the catalyst in re-introducing Heyer to a new generation of readers in the US.

Thirty fellow Heyer enthusiasts will be joining in the festivities, contributing book reviews of all her romance novels - look out for my review of Lady of Quality on 31st August.

It's going to be fun so make sure you pop over to Austenprose.com and follow this bang up to the mark event as it happens!

Here's a full listing of what's coming up:

The Masqueraders, Helen – She Reads Novels

The Talisman Ring, Ana – An Evening at Almack’s

The Corinthian, Danielle – A Work in Progress

The Foundling, Claire – The Captive Reader

Masquerades and The Pantheon

Promenades, assemblies and balls were all in the spirit of the era, but dressing up in exotic costumes with the added frisson of excitement brought about by disguise, gave masquerades and masked balls a touch of glamour.

The first person to introduce masquerades into England and stage them commercially was the Swiss impresario Count Heidegger. John James (Johann Jacob) Heidegger was manager of the King's Theatre, Haymarket and became known as the 'First Minister of Masquerades'. He later held the title of 'Master of the Revels' to George II. From 1710, when there were no stage performances, Heidegger transformed his theatre into a ballroom and charged a penny a ticket. The auditorium and pit were floored over and 500 candles lit the scene. 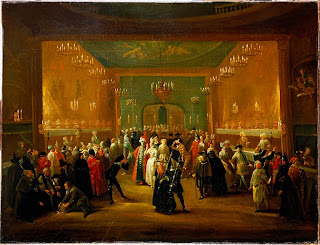 In this circa 1724 painting by Guiseppe Grisoni, richly costumed masked guests promenade between two side tables of food.

The moment of unmasking could lead to pleasure as well as disappointment. Fanny Burney wrote in 1770: The old witch in particular we found was a young officer. The Punch who made himself as broad as long was a very handsome man, but what surprised me was the shepherd whose own face was so stupid we could scarcely tell whether he had taken off his mask or not ... '


Masked balls in the houses of the nobility were events in the social calendar and highly anticipated. When the Duke of Richmond was taken ill and a masked ball had to be postponed, it caused, according to Horace Walpole, 'a sad alarm in the kingdom of white satin and muslin.'

Teresa Cornleys, a singer from Vienna, became known as the Heidegger of her age shortly after her arrival in London in 1756. Madame Cornleys as she became known dominated the masquerade scene for nearly 50 years. Following Vauxhall and Ranelagh, she developed subscription masquerades at Carlisle House, thus encouraging a fashionable clientele. They became incredibly popular and in 1770 the House of Commons was adjourned to allow people to attend. Lord Galway's daughter caused a sensation by appearing in a dress embroidered with jewels, said to be worth £60,000. Lord Shelburne went dressed as a Turk, the Duke of Grafton as a jockey and the Prime Minister Lord North as a Harlequin. Captain Watson, a Guards officer, appeared as Adam but in his clinging, flesh-coloured tights he appeared naked and was forced to leave!

Favourites choices for ladies' costumes were Diana the Huntress, a shepherdess, Melpomene and a Vestal Virgin. At Ranelagh and Vauxhall, there was a dressing room for last-minute disguising.

John Raphael Smith's painting 'Promenade at Carlisle House, Soho Square' is thought to show society beauties Harriet Montagu and Maria Townley, with the figure at the doorway the artist himself.

But things went downhill for Madame Cornleys. In 1771, she was fined £50 for holding a masquerade without a licence and was declared bankrupt the following year. The main cause of her downfall was the opening of the larger, more attractive assembly rooms in Oxford Street - The Pantheon. The Pantheon put on masquerades in open competition to Carlisle House and although Madame Cornleys staged comebacks, she was eventually forced to sell. Carlisle House was demolished in 1788. The Pantheon was designed by the then almost unknown James Wyatt. Estimates of the building costs vary, but it was at least £30,000. The architecture echoed some of the features of it's Roman namesake and Mr. Burney stated some years later that it was 'regarded both by natives and foreigners, as the most elegant structure in Europe, if not on the globe… . No person of taste in architecture or music, who remembers the Pantheon, its exhibitions, its numerous, splendid, and elegant assemblies, can hear it mentioned without a sigh!'

At the outset, standards and social tone were high. When it opened on 27 January 1772, up to 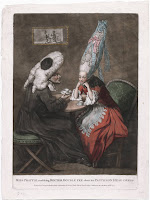 fifty pounds was paid for tickets for the first night which attracted over seventeen hundred members of high society including all the foreign ambassadors and eight dukes and duchesses. During the first winter there were assemblies only, without dancing or music, three times a week. In subsequent seasons the entertainments included a mixture of assemblies, masquerades and subscription concerts.

In the 1780s the popularity of the Pantheon declined. After the destruction of the King's Theatre by fire in 1789, it was converted into an opera house on a twelve year lease. James Wyatt was once again the architect. After only one complete season of opera the Pantheon was burnt to the ground in 1792.

By 1795 the structure had been rebuilt in a similar but not identical form and it was leased as a place of assembly to provide masquerades and concerts. The principal room of this reincarnation was not a rotunda but consisted of "an Area or Pit, … and a double tier of elegant and spacious Boxes, in the centre of which is a most splendid one for the Royal Family". The Pantheon reopened with a masquerade on 9 April 1795 but the revived assembly rooms were a failure.

From 1798 to 1810 the shareholders reverted to the original custom of managing the Pantheon themselves but the popularity of the entertainments continued to decline and it suffered the same decline in standards that affected Carlisle House.

It became the haunt of 'a motley crowd of peers 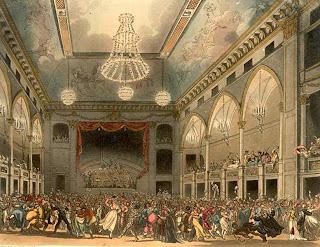 and pickpockets, honourables and dishonourables, demireps, quidnuncs and quack doctors.' Ladies wore increasingly risque costumes while men were clad in loose-hooded cloaks and half-masks (known as dominos). Behaviour grew more licentious and this print (above) by Rowlandson gives a clue to the riotous evenings that were taking place by the early years of the 19th century.

In 1811–12 the building was converted into a theatre, but this was unsuccessful and the career of the Pantheon as a place of public entertainment came to a close in 1814, when it was turned into a Bazaar. The site is now occupied by Marks & Spencer.