Ever feel the need to reboot your creative muse?

Remind yourself why you love words and story-telling? :)


I know I do and one of my methods is to listen to (rather than read) something that's rich in language, style and verve. There's the classics, of course, like Gaskell's North and South and Georgette Heyer audiobooks have been favourites of mine for years.  The new-ish (although abridged) versions of The Convenient Marriage, Venetia and Sylvester  read by the delectable and chocolate-voiced Richard Armitage are fabulous and at the top of my play list ;0)

But occasionally I crave something different and then I return to a monologue comedy called Sir Henry at Rawlinson End by writer and musician Vivian Stanshall.  I've listened to this innumerable times over the years and never, ever get tired of it.

So, what exactly is it? 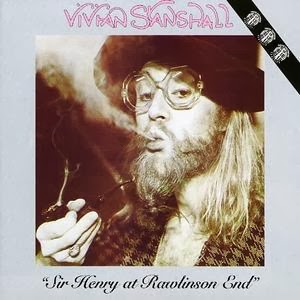 Sir Henry at Rawlinson End originated in Stanshall's performances and recordings for the John Peel show on BBC Radio One in the mid-1970s.  Contributing to Peel's programmes over several years, Stanshall played many new and old songs and Peel would later broadcast recordings made especially by Stanshall as parts of a sporadic "Rawlinson End" saga.

Viv Stanshall compiled and edited several for release, all of which related to Sir Henry Rawlinson and his country seat, Rawlinson End.   Sir Henry at Rawlinson End came out 1978 and it contains possibly the most entertaining 50 minutes you will ever enjoy.  For me and many others, it's a masterpiece, a work of undeniable genius from a man who was, on his day, one of the funniest men in Britain, a brilliant wordsmith and a true British eccentric.

Sir Henry at Rawlinson End  features Stanshall talking and singing as multiple characters.  The scene is the faded grandeur of an aristocratic manor - Rawlinson End - where the terrifying Sir Henry and a cast of larger than life characters go about their daily excursions.

It's irreverent, surreal and complete nonsense, at times non-PC, filled with puns, double-entendres and above all astonishingly clever wordplay.  Viv Stanshall's use of language is extraordinary.  He moves from the bawdily asinine and wacky to the sublime in a single sentence.  The piece is crammed with wonderful one-liners and all narrated in Viv Stanshall's plummy and hugely expressive voice.  His exquisitely sharp, savage and witty descriptions display English usage that is almost Shakespearean.  They paint some of the most vivid and laugh-out-loud funny scenes I've ever listened to. The richness of the descriptions and narrative brings me back time and again, finding new nuances and meanings.

Sir Henry at Rawlinson End can be quite hard to listen to the first time - it's style, like Spike Milligan and Monty Python, takes some getting used to - but stick with it and you'll be rewarded with some of the most unique, rhythmic and evocative prose that ever graced a CD (or download :D ) It will have you reaching for your dictionary (corroboree...quisling...opsimath) and marvelling at Viv Stanshall's genius.

Viv Stanshall died in a fire at his Muswell Hill home during the early hours of March 6th, 1995.

Sir Henry at Rawlinson End is arguably the finest hour of this Great British eccentric who was an accomplished singer-songwriter, musician, poet, wit and author and who you might have already unknowingly encountered as the Master of Ceremonies on Mike Oldfield's famous album, Tubular Bells.

Next time you need to simply wallow in the joys of the English language, why not try something completely different and listen to, and marvel at, the incomparable piece of nonsense and exquisite prose of Sir Henry at Rawlinson End?!   There's a very short excerpt of the opening here to give you a flavour :)