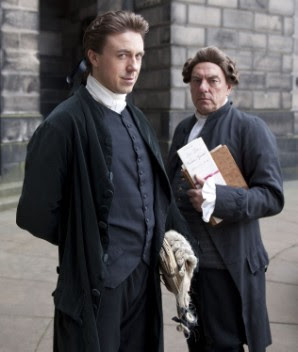 Garrow's Law: Tales from the Old Bailey ended it's four part run on BBC 1 on Sunday, so with m'lud's permission, I'd like to offer my verdict and say I loved it.

Garrow's Law has been a delight to brighten these dark November nights and many others feel the same, judging by the buzz on the web and elsewhere. Please, BBC, commission a second series! It's been a long time since I have been as enthralled by TV programme as I was by Garrow's Law.

For those who were watching over on ITV and missed this slice of TV heaven, here's a quick resume. Garrow's Law is set in Georgian London in the 18th century. Co-created and written by Tony Marchant, one of our best TV scriptwriters, it is inspired by the life of the brilliant, pioneering barrister William Garrow (played by Andrew Buchan, about whom more anon) and his struggle to reform the legal system. Each one hour episode follows Garrow and his associate Southouse (played by Alun Armstrong) in their fight for justice. The cases featured are all drawn from actual trial transcripts available at the OldBaileyOnline.

William Garrow was born in Uxbridge, Middlesex in 1760. He was articled at the age of 15 to an attorney, John Southouse of , Cheapside and admitted as a student to 's in 1778. During his legal studies, he spent hours observing what passed for fair trials and when called to the Bar in 1783, he set about redressing the balance - trials then were firmly skewed in favour of the prosecution. Prosecutions were taken out privately and reward-driven. The accused were put in the dock and often had no-one to defend them. All they could to do was speak for themselves and be found guilty or not guilty depending on how they answered the questions. Even if a prisoner had defence counsel, the barrister wasn't allowed to see the indictment against his client or visit him in prison. Nor, amazingly, was defence counsel allowed to address the jury or make an opening or closing address. A mob-like atmosphere pervaded the court. Justice was indeed rough and stakes were high. Once found guilty, the prisoner could be sent to the gallows for even minor offences.

Garrow was considered common and ignorant by his rivals because of his unorthodox entry into the law (he had not been to Oxford). He also had the insecurity of his lower middle class background to contend with. He was, however, a gifted and driven maverick and enjoyed immediate success when called to the Bar, his exploits in court soon catching the attention of the press. Over the following decade, Garrow, acting for the defence in the vast majority of cases, championed the underdog and raised the rigorous cross-examination of prosecution witnesses to an art form that paved the way for the modern adversarial system as practised in the United Kingdom and its former colonies, including the US. He pioneered the right to be presumed innocent until convicted by a jury beyond reasonable doubt.

Garrow later became King’s Counsel, Solicitor-General, Attorney-General, Judge and an MP, but the series concentrates on his early, trailblazing years at the Old Bailey.

By all accounts, Garrow’s private life was as extraordinary as his professional life and we get tantalising glimpses of the burgeoning romance between William and Sarah Hill (played by the captivating Lyndsey Marshal), the wife of prominent MP Sir Arthur Hill (Rupert Graves). There is also the father-son relationship between Southouse and Garrow, beautifully observed by the always excellent Alun Armstrong and Andrew Buchan. 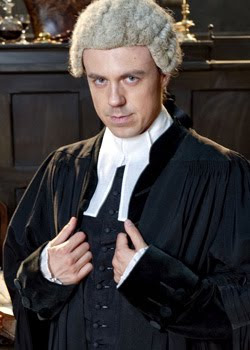 It speaks volumes for his talent that he can tackle two such diverse roles and make them entirely his own. And any bloke who can deliver smouldering looks while wearing a wig, hair extensions and heels deserves massive kudos *g* It’s not giving any spoilers to say that the glass of water moment in episode 4 of Garrow’s Law is my TV highlight of 2009 ;0)

It's astonishing to think that few people have ever heard of William Garrow, including those in the legal profession. This series should redress that. I hope it wins plenty of awards – it certainly deserves to. For his achievements, Garrow deserves his place in history, his place in the nation’s consciousness and perhaps a place on the fourth plinth in Trafalgar square. Despite the historical setting and occasionally arcane language, Garrow’s Law feels curiously pertinent to today. It serves as a reminder that the rights and legal system we enjoy now had to be fought for and should never be taken for granted.

So what are you waiting for? :-D For those in the , it’s still available on iPlayer for short time. Catch it while you can. The DVD is available 4th January 2010 and can be preordered now from BBC Shop, Amazon and other outlets. When you’ve done that, contact the BBC via pov@bbc.co.uk and add your voice to the clamour for a second series...

If you want to find out more, here are some useful links:

The official BBC website for Garrow’s Law: Tales from the Old Bailey

Sir William Garrow: His Life, Times and Fight for Justice by John Hosstetler and Richard Braby (a descendant of Garrow) with a foreword by Geoffrey Robertson QC - published by Waterside Press on 30th November 2009.

No news yet on Edmund Butt’s fabulous soundtrack being issued but fingers crossed the BBC realize they are onto a winner with Garrow’s Law and make it available alongside the DVD.

(all photos copyright BBC and ITV)

I needed a catchy title for this blog post and a homage to V for Vendetta (great film!) fitted the bill perfectly. Or maybe I should have coined, in true V fashion, 'Voila! Voluptuous voice to vocalise Venetia!'

Enough of the alliteration for the moment, let's get down to the news - the fabulous news -that Richard Armitage, he with the voice like liquid chocolate, is to read Georgette Heyer's Venetia for Naxos audiobooks. Richard's reading of Sylvester for Naxos was a huge success and now he's to tackle Rake Damerel et al. *Happy sigh* I confess that when those of us on the C19 Georgette Heyer group were discussing which Heyer novel we would like Richard to read next, Venetia came top of the list. It seems Naxos thought the same :0) I love Venetia. It's Heyer's 'grown up romance' and even though there's not an explicit sex scene in sight, the passion fairly sizzles on the page. A pity this audiobook will be abridged but perhaps that's one reason Richard has managed to fit the reading into his busy filming schedule.

I’ve been a fan of Richard’s since 2004 when he appeared as John Thornton in the BBC production of North and South. Since then his career has gone from strength to strength. He’s appeared in the Vicar of Dibley, Robin Hood and Spooks, among other things. Richard's voice talents are as astonishing as his on screen acting abilities, though, and now he's winning new fans for his delightful reading of Georgette Heyer.

Venetia by Georgette Heyer and read by Richard Armitage is available April 2010 and can be pre ordered on Amazon UK, Amazon.com and The Book Depository. If you follow the links on RichardArmitageOnLine you will also be making a contribution to one of Richard's chosen charities. 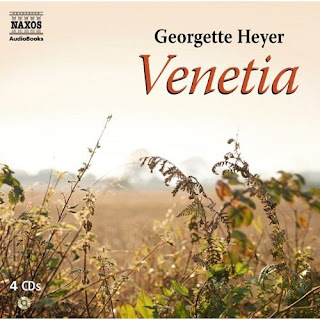 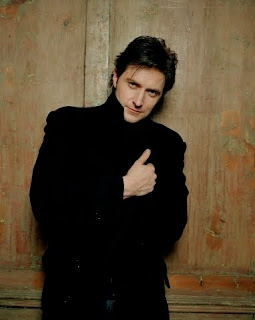 I predict the verdict from the vox populi vis-a-vis this velvet voiced version of Venetia will be that it is a veritable gem ...