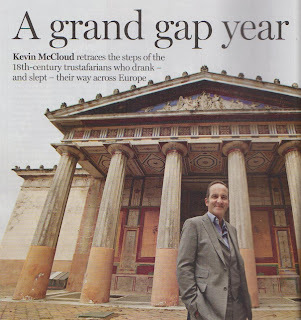 Kevin McCloud’s Grand Tour is a new four part TV series on Channel 4, and part 1 aired last Sunday evening. In the programme, Kevin retraces the steps of the early 17th & 18th century aristocratic adventurers, who were shipped off to Europe in the historical equivalent of the gap year to learn about life, love, sex and culture. Some of them, like Inigo Jones and Robert Adam, brought back ideas about architecture that had a lasting impact on cultural life in Britain. The classical design influences they soaked up on the Grand Tour are reflected in many of our most beautiful buildings, such as Banqueting House Whitehall, the Bank of England and Covent Garden Piazza, as well as numerous great houses and other buildings in towns and cities across the country.

The Grand Tour is often mentioned in historical romances, but rarely in detail, so this series is going to be fun to follow. The cost of the original Grand Tour was rather staggering, and therefore reserved for what Kevin McCloud describes as 'young, posh and loaded' gentlemen. The average cost of £300 (plus another £50 if accompanied by a servant) equates to £40,000 in today's money. Then there are the funds for those little extras: wine, gambling and sex ;0) Apparently the English gained a reputation early on for partying hard!

In part 1, after a quick stop in Paris to spend a fortune on the latest fashions - there's a very funny sequence where Kevin goes to a couturier and emerges dressed in the most outrageous outfit, just as the original Grand Tourists would have done - it was on to northern Italy, to Genoa, Vincenza and Venice. The programme was visually stunning and Kevin McCloud is a knowledgeable and engaging guide who never allows his presence to overwhelm the subject matter. I'll certainly be tuning in to the rest of the series and buying the accompanying book :)

I had a fabulous day yesterday in the company of fellow scribes Phillipa Ashley and Nell Dixon. We met in Lichfield, a city steeped in history with a beautiful cathedral and Georgian architecture, and oh-so-tempting shops. We indulged in plenty of coffee, writerly chat and scoffed calorie-laden cake in a tea shop straight out of a Miss Marple story!

We didn't have time to visit Samuel Johnson's house (too busy shopping and chatting) but it's on my 'to do' list as 2009 - 18th September, to be exact - is the 300th anniversary of the great man's birth.

A rush to tie the knot in Gretna Green

Yesterday was 9th September, a date that sparked a rush of weddings in Gretna Green. The special date (9/9/9) was predicted to be particularly popular with UK emergency service workers planning on getting married. (For those who may not know, 999 is the UK telephone number for fire, police and ambulance services)

47 marriages were due to take place yesterday in Gretna, a number well up on the usual number of mid week weddings in the famous border town. There’s no excuse for the 47 couples who tied the knot in Gretna yesterday to forget their anniversary *g*

A soupçon of history: Gretna Green is one of the world's most popular wedding destinations, hosting over 5000 weddings each year. Gretna's famous runaway marriages began in 1753 when the Marriages Act was passed in England. The Act was also known as Lord Hardwicke’s Act, as a reference to the Lord Chancellor of the time. The act stated that if both parties to a marriage were not at least 21 years old, then consent to the marriage had to be given by the parents. The Act did not apply in Scotland, where it was possible for boys to get married at 14 and girls at 12 years old with or without parental consent.

The Marriage Act put an end to irregular and clandestine marriages (including the famous, or infamous, Fleet marriages) and couples had to travel to the village of Gretna Green in order to escape the jurisdiction of English Law.

Gretna Green was described by William Gilpin 1776, as ‘the great resort of such unfortunate nymphs, as happen to differ with their parents, and guardians on the subject of marriage. It is not a disagreeable scene. The village is concealed by a grove of trees; which occupy a gentle rise; at the end of which stands the church: and the picture is finished with two distances, one of which is very remote...

Of all the seminaries in Europe, this is the seat, where that species of literature, called novel-writing, may be the most successfully studied. A few months conversation with the literati of this place, will furnish the inquisitive student with such a fund of anecdotes, that with a moderate share of imagination in tacking them together, he may spin out as many volumes as he pleases. In his hands may shine the delicacy of that nymph, and an apology for her conduct, who unsupported by a father, unattended by a sister, boldly throws herself into the arms of some adventurer; flies in the face of every thing, that bears the name of decorum; endures the illiberal laugh, and jest of a whole country, through which she runs; mixes in the shocking scenes of this vile place, where every thing that is low, indelicate, and abominable presides; (no Loves and Graces to hold the nuptial torch, or lead the hymeneal dance; an inn the temple, and an innkeeper the priest;) and suffers her name to be inrolled (I had almost said) in the records of prostitution.

Wow. 'Vile Place, where every thing that is low, indelicate, and abominable presides.' I don't think Gilpin was too impressed with Gretna and its association with the romance and scandal themes that appeared in popular novels ;0) As my teenage niece would say: way harsh!

Georgette Heyer, Sourcebooks and the art of cover design

As a long time fan of Georgette Heyer, and a collector of various editions of her books, it was great to see that US publishers Sourcebooks Casablanca are issuing reprints of GH's titles in paperback (see above). The UK Arrow reprints have been around for some time now and, sad person that I am, I've bought most of them even though I can't bring myself to throw out my battered, falling-to-bits Pan paperbacks and hardback versions! 95p for a paperback and 3s and 6d for a hardback - ah, those were the days!

The Arrow and Sourcebooks covers might lack the stylised excellence of the original Barbosa designs (given the thumbs up by GH herself), but they have a charm of their own and most of the images seem well matched to the novels. I particularly like the reproduction of a section of the cover image on the book spine - lovely to look at when they are sitting in a row on my bookshelf ;0) This great post by Sarah at Smart Bitches includes an interview with Dawn Pope, assistant design manager at Sourcebooks, who describes in a Q&A session with Sarah the process of choosing a US cover and how they used the Arrow reprints as inspiration.

You know, there's a whole social history encapsulated in book covers; the way they reflect the prevailing fashions of the publication era, and the market the publishers were aiming at - as these versions of Sylvester testify.