I've been unable to blog for a while so I'd like to wish a belated Merry Christmas and a Happy and Healthy New Year to all :0)

With Twelfth Night fast approaching, let's take a look at some of the old customs associated with this festival.  In the Christian calender, 6th January is Epiphany - named after the Greek word for manifestation and marking the manifestation of Christ to the Magi or wise men.  The secular name for celebrations, however,  is Twelfth Night, the origins of which are obscure but for centuries it was the culmination of a period of merrymaking which began on Christmas Eve.

In Tudor times, Twelfth Night and Day were marked by plays, pageants and masques and by the exchanging of gifts.  Twelfth Night, or What You Will by William Shakespeare was written to be performed as Twelfth Night entertainment and the comedy has many elements that are reversed (such as a woman dressing as a man and Malvolio imagining he can become a nobleman), in keeping with the revelry associated with Twelfth Night celebrations, 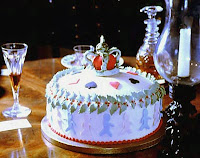 Two long-standing features of Twelfth Night celebrations were the games and the baking of a Twelfth Night cake.  The role of King and Queen were chosen at random from those present by whoever found the bean in their piece of cake becoming King, and whoever found the pea becoming Queen.  Once appointed, the King and Queen ruled over the rest of the entertainment.  A clove was also sometimes hidden in the cake, with its finder designated the Knave (Samuel Pepys confessed to finding a clove in his slice, but secretly putting it in his neighbour's portion!)  Thimbles, coins, rings or simple tickets were used to select characters for others present. 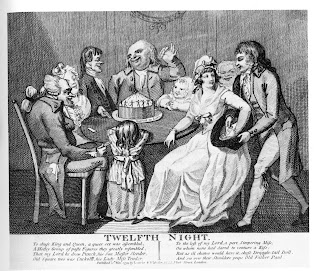 One anonymous writer in the Universal Magazine of 1774 wrote:

'I went to a friend's house in the country to partake of some of those innocent pleasures that constitute a Merry Christmas; I did not return until I had been present at drawing King and Queen, and eaten a slice of the Twelfth Cake.....A noble cake was produced, and two bowls, containing the fortunate chances for the different sexes.  Our host filled up the tickets; the whole company, except for the King and Queen, were to be ministers of state, maids of honour, or ladies of the bedchamber.  Our kind host and hostess, whether by accident or design, became King and Queen.  According to Twelfth Day law, each party is to support their character until midnight.'

The tradition of cakes on Twelfth Night was so strong that it became the busiest day of the year for bakers and confectioners, as demonstrated in this 1827 extract from William Hone's Every-Day Book.

'In London, with every pastry-cook in the city, and at the west end of the town, it is 'high change' on Twelfth-Day.  From the taking down of the shutters in the morning, he, and his men, with additional assistants, male and female, are fully occupied by attending to the dressing out of the window, executing orders of the day before, receiving fresh ones, or supplying the wants of chance customers.  Before dusk the important arrangement of the window is completed.  Then the gas is turned on, with supernumerary argand-lamps and manifold wax lights to illuminate countless cakes of all prices and dimensions, that stand in rows and piles on the counters and sideboards, and in the windows.  The richest in flavour and the heaviest in weight and price are placed on large....salvers; ..... all are decorated with all imaginable images of things animate and inanimate.  Stars, castles, kings, cottages, dragons, trees, fish, palaces, cats, dogs, churches, lions, milkmaids, knights, serpents, and innumerable other forms, in snow-white confectionary, painted with varigated colours, glittering by 'excess of light' reflected from mirrors against the walls.'

But as people gathered around to admire the display, another traditional pastime took place - mischievous youths in the crowd created havoc by surreptiously nailing bystanders clothes to the window frame or tying them to their neighbours!

By the second half of the nineteenth century, Twelfth Night celebrations had begun to wane and the emphasis had shifted to Christmas and New Year.  Nowadays, Twelfth Night still marks the end of the Christmas period but more people know it simply as the day on which decorations should be taken down.  Speaking of which, I have some things to pack away and some cake to eat .... *g*

Email ThisBlogThis!Share to TwitterShare to FacebookShare to Pinterest
Labels: Epiphany, King and Queen, Twelfth Night, Twelfth Night or What You Will
Newer Posts Older Posts Home
Subscribe to: Posts (Atom)