It will be party time at Hanbury Towers on Sunday night.

No, not the usual bread roll throwing competition but a joyful charleston around the ha-ha to herald a new TV adapation of that literary genius and one of my  favourite authors,  P.G. Wodehouse *g*

A six-part series of Blandings starts on Sunday, based on Wodehouse's much-loved accounts of the fictional life and times of the inhabitants of Blandings Castle.  The Blandings stories follow the fortunes of the amiable but befuddled Clarence Threepwood, 9th Earl of Emsworth and his beloved pig, the Empress of Blandings.


I have High Hopes so dear BBC, don't let me down with this new adaptation featuring some of my favourite Wodehouse characters and stories.  The series is adapted by Guy Andrews (Lost in Austen) and directed by Paul Seed (Just William) which augurs well.

And if Blandings is anywhere as good as Fry and Laurie's Jeeves and Wooster, it will be a job well done, old bean ;0)

Here's a taster on YouTube - unfortunately I can't embed for some reason :-/


A Happy New Year to everyone!

Let's get 2013 off with a bang..or should that be a bump in the night? *g* with a guest post from fellow Coffee Crew member, Astraea Press author and good friend Nell Dixon.

Here's Nell to tell us more...


Thank you so much for inviting me to talk about my latest release from Astraea Press.

Lights, Camera, Poltergeist! will be my 21st title release! So a kind of coming of age.

For those who haven’t met me before my name is Nell Dixon and I’m a UK author based in the Black Country, a small region which is more or less dab bang in the middle of the UK. I write for a number of publishers in the US and the UK and have been fortunate enough to twice win the UK’s prestigious romance prize for category length fiction. I’m the only person to have won twice.

Lights, Camera, Poltergeist! is set in Scotland and I thought it might be fun to tell you a few fun facts about Scotland. Author Bram Stoker is said to have taken the inspiration for his novel, "Dracula," from Slains Castle in Cruden Bay, which is wild and remote.


Scotland has many myths and one is the selkie. This is a creature in the shape of a seal that can turn into a beautiful woman. On the fashion front, modern kilts have up to eight meters of material. A modern take on the kilt is to use leather, instead of traditional tartan.  You can read more here. 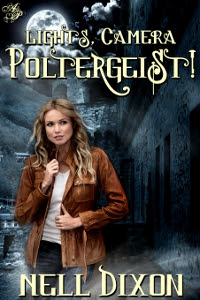 As the presenter for Ghost Uk, the leading TV show investigating paranormal activity, Fae thought she’d seen it all. Until a Valentine’s Eve live show from Scotland’s Fingelly Manor upsets both her preconceptions and her love life.

And here's a wee taster!

John watched as she headed out of the room. Lately, it seemed he couldn't say or do the right thing, where Fae was concerned. He wasn't looking forward to the evening ahead of them any more than she was. Until Tim had sprung his hare-brained scheme for a live Valentine's show on them, John had planned a very different kind of evening with Fae.

Tonight he should have been enjoying an intimate dinner with her at their favourite restaurant, hoping he could put some romance back into their relationship. Instead they were to freeze to death in a cavernous and dingy dining room with the rest of the production team. Worse still, that lecherous creep, Giles, would be ogling Fae at every opportunity.

The room seemed to be growing colder by the minute. The elderly woman finished her ministrations by the fireplace, and a dull orange glow filled the hearth, accompanied by lots of smoke.

The tech staff had gone from the corridor as John crossed the room to stand closer to the meagre fire. No doubt they had slipped off to the kitchen in an attempt to scrounge up more mugs of tea.

He was tempted to go join them, but he really wanted to finish setting up the lighting and placing the motion sensors first.

Silence hugged him like a shroud as he concentrated on tightening the final connection. His breath formed ghostly clouds in the chill air. The fire next to him offered no more heat than a candle.

A growing sense of unease forced its way into his senses, raising goosebumps on his skin. John lifted his head, certain he was no longer alone in the room. At first he couldn't see the cause of the sensation.

A change in the shadows in the far corner of the room, next to a dusty case containing a long-dead fox, caught his gaze. A soft snicking sound followed, like a door being closed quietly. He blinked, unsure if he had imagined the momentary distortion in the oak panelling.


Lights, Camera, Poltergeist! is available now from all good etailers, including Amazon.com  and Amazon UK


And why not try Cue Me In? which also features Fae, John and the Ghost UK team?  Available at Amazon.com and Amazon UK and other good etailers.

You can find out more about Nell and her books at her website and her blog.