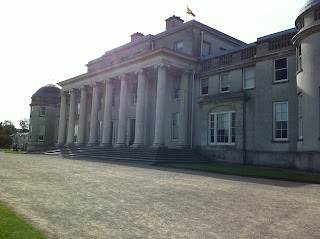 Recently I paid a return visit to Shugborough, ancestral seat of the Earls of Lichfield.  There was no time for looking at the Mansion House, Servants' Quarters or Farm on this occasion (I'm planning another visit later in the year), but I did manage a tour of the walled garden and parkland and thought I'd share some photos :0) 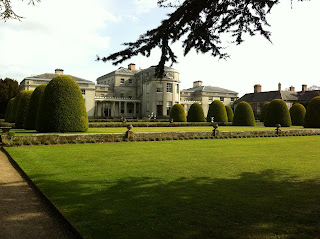 Shugborough is a rarity, a complete working historic estate.  Thomas Anson, MP for Lichfield and created Viscount Anson & Baron Soberton in 1806, was the architect of large scale developments at the estate.

Thomas had married Anne-Margaret Coke, daughter of the great agriculturist Thomas Coke of Holkham.  Coke's drive and ambition obviously rubbed off on his son-in-law and Viscount Anson recruited Samuel Wyatt to create a self-sufficient working estate to rival the best in the country.

The result was the development of a walled garden, a model farmstead, an extended and improved mansion house and a number of classically designed labourers' cottages. 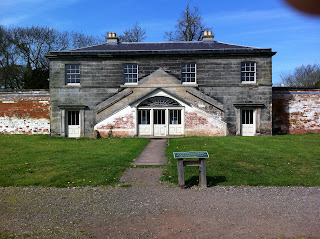 The walled garden, originally designed and built in 1806, was sited half a mile from the mansion house so that it did not restrict the view from the house.

The revolutionary brick walls were hollow inside and contained intermittent furnaces which sent hot air around the garden to produce a mild micro-climate for more tender plants, vegetables and fruit. The impressive head gardener's house (see above), series of bothies (structures which provided accommodation for young unmarried gardeners), stores and workshops were constructed along the north wall.  From the head gardeners house, a large heated greenhouse extended towards the central plunge pool.  Plunge pools (seen in the centre of the picture below) were believed to have been used as dipping pools allowing gardeners to water their crops with rainwater.   Further greenhouses were erected either side of the house along the north wall and you can still see the gable markings of these greenhouses today in the photo. 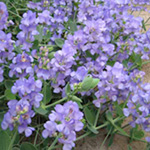 By 1809, there were at least twenty gardeners employed in the gardens, earning between 5 and 13 shillings a year.  It's almost certain that the Lord Anson Blue Pea was grown in the walled garden.  This lovely bluish purple variety of sweet pea was introduced to Britain by Thomas Anson's (1695-1773) sea-faring brother George.  It was found in the Straits of Magellan in 1744 and adapted well to the British climate.  I've grown it myself and it's a beautiful variety.

William Pitt (in his Topographical History of Staffordshire) described the gardens in 1817 as having:

'...very extensive ranges of hothouse, in which pine-apples, the grape, peach, the fig and other varieties of hothouse frtuits, flowers ad plants, are cultivated in the highest perfection.  One of the hot-houses is heated with steam, in which melons and cucumbers are produced in perfection at all seasons.'

Just a little bit more on this post about one of the parkland monuments at Shugborough.

The Tower of the Winds (see left) was completed in 1765 and is based on the Temple of the Winds in Athens.  It was reached by bridges to the porches over a surrounding lake.  Downstairs was once used as a dairy and the 1st Viscount Anson supposedly used the upstairs as a gambling den!