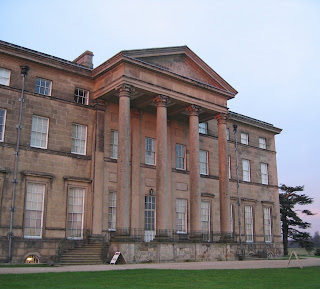 There’s a final opportunity tomorrow to see how Christmas would have been celebrated during the late Georgian period at . I visited the Georgian Christmas Celebration there last Sunday and enjoyed a fabulous afternoon, touring the candlelit rooms and finding out more about Georgian Christmas customs...

Christmas trees are often thought to have been introduced by in the 1840s. In fact, the idea has been around much longer, originating from pagan festivals when the qualities of greenery and light were in demand during mid-winter. Earlier Christmas trees (pre-1840s) were much smaller than today and stood on a table. The tree on display at Attingham is a replica of one described at in 1820:

‘We remember a German of the household of the late Queen Caroline (1768-1821) at making what he termed a Christmas tree for a juvenile party at Christmas. The Tree was the branch of an evergreen fixed on a board, its boughs bend under the weight of gilt oranges, almonds etc.’

Christmas Pudding or plum pudding is eaten at the end of the Christmas dinner. Christmas pudding originates from a 14th century porridge called ‘frumenty’ that was made of mutton and beef with currants, prunes, spices and wine. By the late 1500’s it slowly changed into a plum pudding as cooks added breadcrumbs, suet and eggs to bind and thicken it. To give it more flavour, they also added beer or spirits. Plum pudding became the customary Christmas dessert around 1650, but in 1664 the Puritans banned it, citing it as a ‘lewd custom’ and describing its rich ingredients as ‘unfit for God-fearing people’. In 1714, King George I re-established it as part of the Christmas meal and by Victorian times, Christmas Puddings had changed into something similar to the ones that are eaten today. 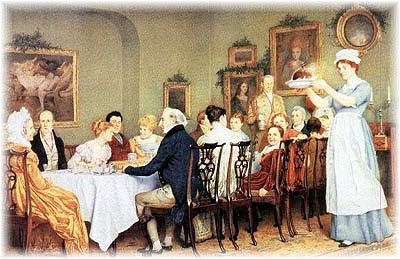 the juice of a lemon

a large glass of brandy

Mince Pies were not as we know them today – they were originally filled with chicken eggs, sugar, raisins, lemons and oranges.

This was similar to mulled wine and was made of the ‘Richest and raciest wines, highly spiced and sweetened, with roasting apples bobbing on the surface’ 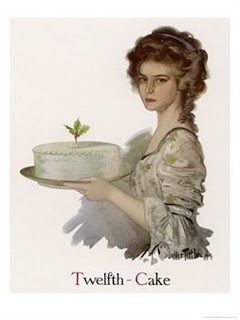 Georgian England. The Twelfth Night ball was one of the grandest of the year and sometimes took the form of a masquerade or fancy dress ball.

The popular custom of choosing a household king or queen on Twelfth Night involved baking a centrepiece Twelfth cake containing a dried bean and a dried pea. The man who found the bean in his slice was elected King for the night; the lady who found the pea, the Queen. Even if they were normally servants, their temporarily exalted position was acknowledged by everyone, including their masters. By the early 19th century, the cake had become very elaborate, with sugar frosting and gilded paper trimmings, often decorated with delicate figures made of plaster of Paris or sugar paste.

The Yule log was chosen on Christmas Eve. It was wrapped round in hazel twigs and dragged home, to burn in the fireplace for the 12 days of Christmas. A piece of the Yule Log was saved to light the following year’s Yule Log.

The Kissing Bough or Ball 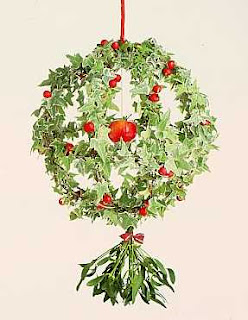 The tradition of kissing under a bunch of foliage is centuries old. By the late 18th century, kissing boughs and balls were common. They were usually made of holly, ivy and rosemary, with mistletoe hanging underneath. Spices, apples, oranges, oat ears, wax dolls, candles or ribbons could also be included. 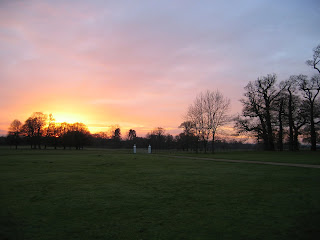 The Attingham Georgian festive extravaganza runs from 19-21st December, from 11am - 4pm. The Tea Room is open from 10.30am - 4pm. For further information contact .

As well as family-themed activities, you can meet Father Christmas and Attingham’s Regency Dandy – I did, and very charming he was too.... ;0)

A very Merry Christmas and a Happy New Year to all and I'll sign off for now with a link to one of my favourite pieces of festive music, Mike Oldfield's version of In Dulci Jublio. :0)