This charming book is a favourite of mine and I thought I'd share some of its delights here. 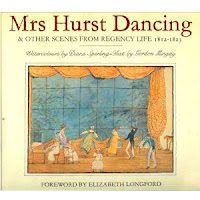 The watercolour sketches reproduced in Mrs Hurst Dancing were by a young English lady named Diana Sperling, mainly between 1816 and 1823.  At the time she was living with her parents, brothers and sister Isabella at Dynes Hall, a large country house near Halstead in Essex.  Many of the sketches depict scenes in and about this house, and also Tickford Park, the Buckinghamshire home of the Van Hagens who were related to the Sperlings.

Diana, or Di as she was known to her family, was born in 1791 and lived with her parents and siblings until her marriage in about 1834.  Her sketches and paintings are delightful.  In a charming, informal manner she depicts the lives of her family and friends.  Donkey races, riding parties, charades, hanging wallpaper are just some of the events she records.  She seems to have had a wicked sense of humour and if her sister Isabella rolled from her donkey (which she often did) or brother Harry fell from his colt, this was sketched with hilarious accuracy and pithy captions added!

As Elizabeth Longford points out in the foreword, 'Diana's birth - gentle but only of the minor gentry - did nothing but good to her art.  In those less grand country houses, with fewer servants, where she and her friends lived, the family could take an active part in the life of the estate, cleaning, decorating, planting.  And things that could go wrong, did go wrong, raising the laughs that cheer this sketchbook.  The Sperling girls had to squash their own spiders on bedroom walls, carry a change of shoes in a bag when they walked out to dinner in single file behind 'The Lord of the Manor', and often lose a slipper in the park mud.'

Here are just a couple of examples from the 70 colour plates in Mrs Hurst Dancing, with captions by Diana and further explanatory text by Gordon Mingay, Professor of Agrarian History at University of Kent.


The watercolour above depicts an incident while the ladies were dressing in their room.  There were two Mrs Van Hagens, the spider-killer was probably Henry Van Hagen's mother as Diana referred to her sister Harriet (married to Henry) by her christian name rather than her married name.

The electrifying machine is obviously Henry's latest toy.  It is probably his wife Harriet looking over his shoulder unwilling to be a party to his experiments.  His mother starts the chain, followed by Diana, Harry and Isabella - who is swooning.  HGS is a member of the Grace Sperling family, relations of the Dynes Hall Sperlings.

As you can see, Diana's watercolours have a wonderful simplicity, freshness and fun as well as giving us a unique glimpse of country life in Regency England.    If you can get hold of a copy of Mrs Hurst Dancing, it's well worth it - it's a gem of a book, especially for anyone interested in the Regency period.

And don't forget that my latest release The Cinderella Debutante - 'an elegant Regency take on a classic tale' - is available now from Amazon.com and Amazon UK.
No watercolours included, just a fabulous read! ;0)